Tips & Articles
of the Falls

The content of this link is a recopilation of the best information about the Waterfalls. We want to share it with you (our customers and friends). We will be very happy to receive your travel comments and input. Please send us your feedback by e-mail to post it in our website. 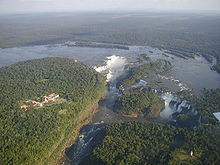 Aerial view, from the Argentine side - Iguazu Fall - Falls and Brazilian tourist complex - Satellite image of the falls
Upon seeing Iguazu, the United States' First Lady Eleanor Roosevelt reportedly exclaimed "Poor Niagara!"[2] Iguazu is also often compared with Southern Africa's Victoria Falls which separates Zambia and Zimbabwe. Iguazu is wider, but because it is split into about 275 discrete falls and large islands, Victoria is the largest curtain of water in the world, at over 1,600 m (5,249 ft) wide and over 100 m (328 ft) in height (in low flow Victoria is split into five by islands; in high flow it can be uninterrupted). The only wider falls are extremely large rapid-like falls such as the Boyoma Falls.
With the flooding of the Guaíra Falls in 1982, Iguazu currently has the second greatest average annual flow of any waterfall in the world, after Niagara, with an average rate of 1,746 m3/s (61,660 cu ft). Its maximum recorded flow was 12,800 m3/s (452,000 cu ft/s).[7] By comparison, the average flow of Niagara Falls is 2,400 m3/s (85,000 cu ft), with a maximum recorded flow of 8,300 m3/s (293,000 cu ft/s).[8] The average flow at Victoria Falls is 1,088 m3/s (38,420 cu ft/s), with a maximum recorded flow of 7,100 m3/s (250,000 cu ft/s).[9]
Mist rises between 30 metres (98 ft) and 150 m (492 ft) from Iguazu's Devil's Throat, and over 300 m (984 ft) above Victoria. However, Iguazu affords better views and walkways and its shape allows for spectacular vistas. At one point a person can stand and be surrounded by 260 degrees of waterfalls. The Devil's Throat, in Argentina, has water pouring into it from three sides. Likewise, because Iguazu is split into many relatively small falls, one can view these a portion at a time. Victoria does not allow this, as it is essentially one waterfall that falls into a canyon and is too immense to appreciate at once (except from the air).
On November 11 of 2011, Iguazu Falls was announced as one of the seven winners of the New7Wonders of Nature by the New Seven Wonders of the World Foundation.
Climate
Iguazu Falls experiences a tropical rainforest climate (Koppen Af) with abundant precipitation and high temperatures all year-round.
1 2 3 4